Periods: Not Just a Gimmick Vada Sultenfuss (Anna Chlumsky) in My Girl (1991). Image from itrulylikethat.blogspot.com

One of my distinct period memories in high school was constantly checking to see if any blood had leaked onto my dress. Especially at orchestra rehearsal on hot days because the summer-induced sweat gave me the misimpression that my pad was not perfectly aligned with my underwear. I’d turn my head both ways to ensure no prying eyes would catch me in the act. Then, I’d swiftly sweep the back of my dress to the side to check for potential blood leakage.

Most of the time, there wasn’t. If there was, I’d tie my school jumper around my waist as low as I possibly could and pray that nobody’s eyes would flicker to the tiny insignificant splotch of red at the bottom of my dress. As if it were something to be ashamed about. I’m twenty now, and I guarantee that I’d still do this in the event of a period spillage.

I don’t know when I accepted that there was something wrong about leaking blood. Tucking pads in my sleeve and smuggling them to the bathroom just seemed like a normal part of having a period. We go so far as to pretend that we’re not experiencing anything at all.

Having to hide our periods is ingrained in our culture. It’s coined the menstrual taboo. While it affects people differently, the taboo generally stems from the belief that menstruation is something be be ashamed of. The film industry does not help when it comes to abolishing this. When periods make a rare appearance in movies, they tend to perpetuate the taboo further by re-consolidating fears about menstruation.

When our experiences are not reflected accurately back to us in the media, our perceptions become distorted, therefore validating certain misconceptions we have about menstruation. Let’s face it – we still try to hide our periods because of misconceptions that periods are apparently ‘gross’. Accurate and positive portrayals of menstruation are scarce.

It’s worth acknowledging that when periods are depicted in films, they’re usually only represented at menarche (meaning one’s first ever period). Or to signify that a woman is pregnant. They’re given so much momentum in these situations because they represent change. However, all the other times that women experience periods are invisible in most narratives.

Vada’s menarche in ‘My Girl’ (1991) is initially terrifying because she has no knowledge about menstruation. The hallway is interrupted by a high-pitched scream, as 11-year-old Vada (Anna Chlumsky) scrambles downstairs and confides in her father’s friend, Shelly (Jamie Lee Curtis). She believes that she is ‘haemorrhaging’. Vada’s confusion ends when Shelley explains that the bleeding is all a part of growing up. More than anything, it is a bonding moment between Shelly and Vada.

Contrastingly, when the protagonist of cult horror film ‘Carrie’ (1976) gets her first period she thinks she is dying. When Carrie (Sissy Spacek) notices blood on her fingers, she begins hyperventilating. As the blood seeps through the bathroom, her classmates taunt, “Period! Period!”. She becomes a public spectacle. Carrie crumbles to the tiled floor, her cries visceral.

The scene is disconcerting because her period is treated as a point of humiliation. The film suggests that periods are something that young girls should be ashamed of. Carrie has two choices: to hide her period or be bullied.

This cruel treatment of periods seems to be particularly evident in horror films. In the grotesque thriller ‘Veronica’ (2017), her first period signals the infestation of a demonic presence in her home and her intensified role as a maternal figure to her younger siblings. Similarly in ‘Ginger Snaps’ (2000), Ginger’s menarche intertwines with the moment she begins to metamorphosize into a werewolf. There is a clear link between periods and the supernatural in films. These dual narratives often parallel one another, painting puberty and the journey to womanhood as unassuming and sinister.

People would get used to the idea of periods if they saw it as something that happened regularly. To see menstruation as only worthy of documenting at point of menarche detracts from its visibility and normalisation. It forces women to hide the severe discomfort that comes with periods.

Thankfully, menstrual representation in films seems to be (slowly) changing. In ‘20th Century Women’ (2016), Abbie (Greta Gerwig) announces that she has her period, to the disgust of Dorothea (Annette Bening) whose teen son is sitting at the table. “Do you have to say that?” She scolds in a lowered voice.

Abbie retorts, “If you ever want to have an adult relationship with a woman, like if you want to have sex with a woman’s vagina, you need to be comfortable with the fact that the vagina menstruates. Just say menstruation, it’s not a big deal”.

Albeit uncomfortable for all involved, Abbie’s confronting activity works to normalise menstruation. It’s painstakingly clear – you shouldn’t have to flinch when talking about periods. The frank discussion about periods in ‘20th Century Women’ shows that nowadays, we can talk about periods honestly and openly without any stigma attached. Gone are the days of Carrie and Blue Lagoon (1980). We all get periods and we shouldn’t have trouble saying it aloud.

It’s weird to think that even in 2019, some people are still mortified by menstruation. We’ve moved a long way (especially since the clinical blue-ish blood on period advertisements – look at this new advertisement here), but we’ve still got quite a long way to go. Let’s see real depictions of periods on screen. For what they really are; bloody. Sometimes kind of painful. But ultimately just, a normal thing. 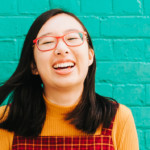 Casey is an Arts/Law student at Monash University and is passionate about storytelling.

Have you signed our Rosie Period Petition yet? We are calling on state and territory Education and Health Ministers to provide free menstrual products in school bathrooms, so that every student can navigate their school years with dignity + respect. If you agree that it’s #AboutBloodyTime you can sign the petition here: